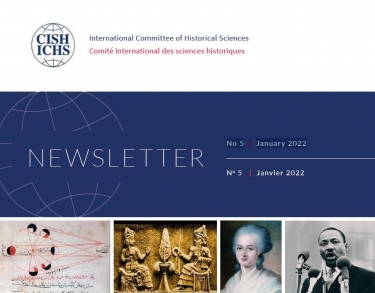 This editorial is written shortly before the end of the year 2021 and thus much later than originally planned, as if the year had run by without leaving any deeper traces. In view of the many cancelled scientific events, one might actually get the idea that this is a year that has been erased from the calendar or the collective memory. But of course it is not, and anyone taking stock of this year will recall an astonishing number of adaptations to the new reality of the pandemic that we have made individually and collectively.

The International Historical Committee has had to postpone its Congress again, scheduled for August 2021, but unlike in 2020, it has not simply decided on another delay, but has held a General Assembly to take important decisions that will determine its future.

This General Assembly has decided on changes in the offi ce of President and General Secretary, thanked the previous incumbents and noted with approval the plans of the new ones. It has held the necessary
elections for new members of the Board, refl ecting the usual changes in the historiographical orientations represented there. It has determined the location of the next Congress, to be held on the 100th anniversary of the founding of the CISH in 2026.

And it has opened up the programme of the Poznan Congress to new, complementary proposals, thereby refl ecting that historiography has naturally evolved, chosen new foci and tried out new procedures since the selection of major and minor themes for main sessions, roundtables and panels at the General Assembly in Moscow in 2017.

This newsletter presents the results of this General Assembly, which took place in two sessions and was conducted by treasurer Sacha Zala with the usual precision of Swiss organisation. At the same time, we
look ahead to the meeting in Poznan, which is sure to be a moment of enthusiastic reunion that we all look forward to with anticipation. A look back at the Warsaw Congress held in 1933, which a carefully
prepared edition of materials by the present Polish organising committee allows, perhaps helps us to place the current diffi culties in historical perspective and thus also to put them into perspective a little. As
historians, we look back in the current pandemic not only at the history of global health, but also at how we have dealt with other dynamics that have challenged the usual course of events. Now that history is less
and less used for heroisation (even if it still happens from time to time), it sometimes serves as a consolation because historians become spoilsports in the face of a discourse of newness. However, we should
not let this spoil our joy for a new year, which will certainly also hold unexpectedly pleasant things in store.

In this spirit, I wish you a successful 2022 on behalf of the entire Board of the CISH and, as always, I look forward to your feedback and suggestions with which this newsletter can be enriched.